Everybody wants to rule the World Wide Web: Give CERN some royalty-free computer love 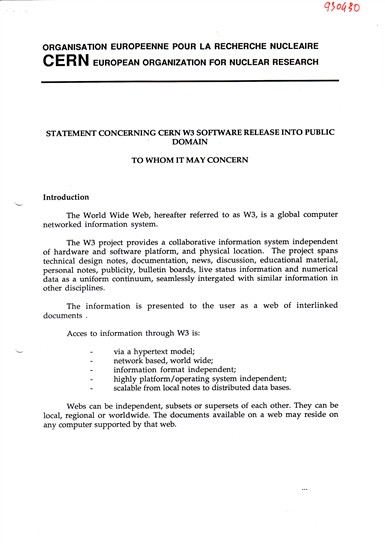 NPR reports Wednesday on "The Single Most Valuable Document In The History Of The World Wide Web," noting that twenty years ago this week, CERN officials released into the wild the intellectual property rights to the Web, granting permission for anyone to "use, duplicate, modify and redistribute it," royalty-free.

Even digital grass can look greener, and the hypothetical of the moment is about how the Web might have developed had it been patented instead of given away.

NPR emailed Mark Lemley, an intellectual property expert at Stanford, and asked: "Could the Web have been patented? And how would the world have been different if it had?"

Here's an excerpt from his reply:

Even in 1993, as the Web was being introduced, scholars and the government interested in data communications were talking about the "information superhighway," a proposed centralized, government-sponsored broadband network that would have delivered video from TV stations and other approved content. [It is this, and not the Internet, that Al Gore "invented"].

The Web is what happened from the bottom up while government and the telecommunications companies were still figuring out how to build something from the top down. But a patent right could have changed the course of innovation from the decentralized Internet model to a centralized information superhighway model. And we would all have been the poorer for it.

The Daily Mail reports that the first website ever was restored (and then crashed) on April 30 in honor of the anniversary.

Sir Tim Berners-Lee's stark page was an outline of the "few crucial properties of WWW," wrote project collaborator Robert Cailliau in a CERN blog post this week. Cailliau details the journey of from intellectual property decision to binding legal document:

[T]he arguments were complex, the models untried, and it was not clear what would happen to WWW in either case...as we were more interested in the excitement of making something useful than in getting rich, we opted for using the old CERN model for technology spin-off: make it available.

Thanks, CERN. Love, everybody.