Nominations for the 65th Primetime Emmy Awards were announced Thursday, and the ritual of being aghast was carried out all day as cult shows failed to make the cut, while deserving actors were overlooked.

If you find you're short on snub-rage and require a more serious reason to be upset about television, consider this: According to The Hollywood Reporter, only five of the 94 acting nominations went to minorities this year.

Did your favorite actor or television series fall short of potential envelope status? Give it the praise it deserves in the comments.

SNUBS: FOR YOUR CONSIDERATION

1. In the category of Lead Actress in a Drama Series, Tatiana Maslany of BBC America's "Orphan Black" went from black horse to sad trombone after being overlooked for a nomination despite the seven or so roles she plays on the sci-fi series.

Some reaction suggests that Connie Britton — while a favorite to play Wendy Davis in the make-pretend "Filibuster" feature — was not worthy of the grand ole Emmy treatment for "Nashville":

2. In the "Hugh" category, there may have been some confusion, according to fans of NBC's "Hannibal":

3. Frustration is a cycle. A loop, even. Here's how "Mad Men" actor Vincent Kartheiser deals with his Emmy snub:

4. Nick Offerman wasn't nominated for "Parks and Recreation." This is no joke. He can make a canoe out of you. Show some respect:

5. And now, an Emmy "Horror" story. It's typically boring when people tell you about their nightmares but this greedy sweep of nominations is one we can all share (via Entertainment Weekly):

Keep in mind, getting the most nominations, or even the most wins, doesn’t mean it’s the best show. Winning the best drama series category means it’s the best show. But still … the Emmys seem to snub any FX show that isn’t "American Horror Story" — like "Justified," "Sons of Anarchy" and "The Americans."

6. "Emmy voters are zombies?" AMC mutters to itself after receiving zero big ticket nominations for its hit series, "The Walking Dead." Here are some ideas for the consolation party: 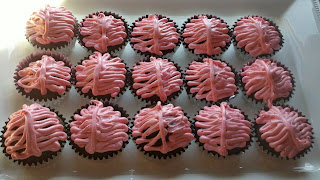