There’s been a lot of good news at the beleaguered San Diego Opera and it finally looks as though it will be alive for its 50th anniversary next year. The latest was the appointment of a new, if temporary, general manager, William Mason.

Mason is the former impresario of the Chicago Lyric Opera, which has long been thought of as America’s No. 2 company after New York’s Met. Mason, who had over 50 years with that organization, presided over the Lyric through its own tough times recently.

“They need somebody new,” Mason explained to station KPBS. “I’m 72-years-old. I have no new ideas, and I’m not trying to formulate any.” In fact he’s four years older than his immediate predecessor, Ian Campbell, who employed his ex-wife as his assistant and was forced out after he tried to close the 49-year-old opera company in March.

Campbell was roundly castigated for a lack of vision that might have mitigated what he termed the company’s inevitable decline. Questions were also raised as to whether Campbell’s pension settlement possibly befitted from the shut down. It now appears it didn’t, but there was a strong feeling he might have sought a younger, more competent successor a year or two ago when the going got tough rather than staying on board until he  declared the ship was sunk. After Campbell was pushed out, a quickly reformed management was able to raise over $2 million — enough, it was said, to keep the SDO alive. 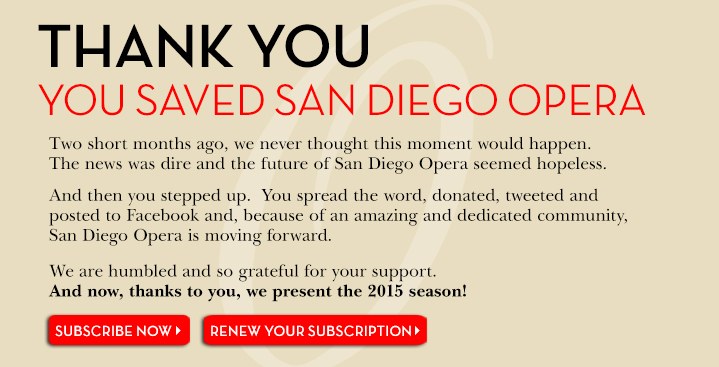 (San Diego Opera thanks its supporters on its website)

In any case, the state attorney general is going to be checking out the company’s finances and will have the ultimate say in who did what to whom on that level. Meanwhile, the renovated company is planning on a truncated 3-opera season that will include the innovative American opera,  John Adams’ “Nixon in China” and two standbys: "Don Giovanni’’ and “La Boheme.” A plan to do Wagner’s “Tannhauser” was scratched as too expensive.

Meanwhile, while Mason may have "no new ideas" and ‘’isn’t trying to formulate any,’’ this statement carefully sidesteps the fact that he’s already had some very bright ideas that managed to keep the Chicago Lyric in the pink. One of the most successful innovations was the Lyric’s production of some grand old Broadway musicals outside of the opera season, like “Oklahoma” and "Showboat.”

At least “Showboat” with its magnificent Edna Ferber story of the burden of racism and those terrific Jerome Kern songs — like “Old Man River’’ and "Can't Help Lovin' Dat Man" — has been tip-toeing into the grand opera repertoire for decades. It’s probably time it was invited in to walk right in and sit right down. Many music lovers, me included, would rather drive to San Diego to see “Showboat” than just one more “La Boheme.”