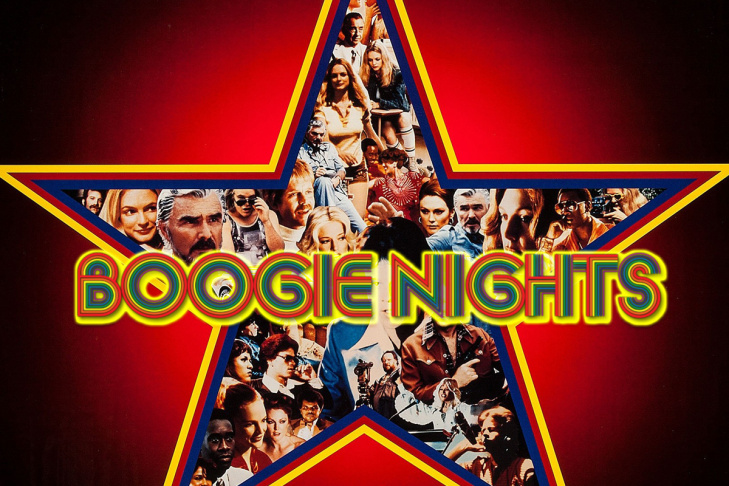 Paul Thomas Anderson’s classic film “Boogie Nights” revisits a Los Angeles aglow with neon and pulsing with the grooves of 1977. The movie features an all-star ensemble cast and impeccably captures the era’s style, music, and, of course, the filmmakers and amazingly named performers behind the so-called golden age of pornography. “Boogie Nights” won critical acclaim when it was released in 1997, including three Academy Award nominations for best original screenplay, best supporting actor, and best supporting actress.

Audienced joined Larry Mantle at The Theatre at Ace Hotel on July 27 for this installment of FilmWeek Screenings, during which Larry showcased the movie in the highest quality fidelity and hosted a post-screening conversation with special guests. The series – selected and hosted by Mantle – is dedicated to movies set in Southern California.

“‘Boogie Nights’ is one of my favorite movies of the 90s. Having interviewed actors and directors of adult films of the 70s, I was familiar with how quickly the business shifted from larger budget movies shown in theaters to cheaper home videos. Paul Thomas Anderson puts us right in the middle of that transition, in its home, the San Fernando Valley. He also creates highly-developed and poignant characters, giving his superb ensemble cast strong material with which to work. Though ‘Boogie Nights’ is a terrific re-creation of a time in LA, it’s those performances and characters that linger most for me.” – Larry Mantle

“Boogie Nights” focuses on Eddie Adams (Mark Wahlberg) and his rise and fall as the adult film star “Dirk Diggler” in a world of sex, drugs, and the Valley.

Shira Tarrant – professor of women's, gender, and sexuality studies at California State University, Long Beach, and author of several books, including "The Pornography Industry: What Everyone Needs To Know” (Oxford University Press, March 2016).

Please note that this movie is rated R by the Motion Picture Association of America. This rating suggests that the movie contains some adult material and those younger than 17 are required to be accompanied by a parent or adult guardian. If you have any questions about this or the event, please contact us at events@kpcc.org.