It's no surprise that thousands of people are injured while using consumer fireworks every year. Here's how to make your Fourth of July festivities filled with barbecue and booze instead of injuries and run-ins with the police.

Want to leave the fireworks to the pros? Scroll to the bottom for a map of local shows.

RELATED: Fireworks over Los Angeles: What to expect when you're expecting explosives (videos)

Q: Where are fireworks legal?

A: Below are cities in SoCal that permit the sale and use of state-approved "safe and sane" fireworks.

If your city is NOT on this map, any fireworks are illegal for personal use.

Q: What does "safe and sane" mean? 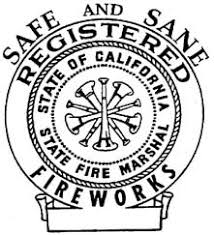 A: "Safe and sane" generally refers to fireworks that do not fly or explode. Fireworks bearing the "safe and sane" logo may be sold from noon June 28 through noon July 6 every year, unless a local ordinance is adopted and is more restrictive, according to the California Department of Forestry and Fire Protection.

Here is a full list of state-approved safe and sane fireworks.

Q: What types of fireworks are illegal?

A: Illegal fireworks include the following, according to CAL FIRE:

Q: Are there really more injuries on the Fourth of July?

A: U.S. hospital emergency rooms treated an estimated 9,600 people for fireworks-related injuries in 2011. Furthermore, fireworks caused an estimated 17,800 reported fires, including 1,200 total structure fires, 400 vehicle fire, and 16,300 outside and other fires that same year, reports the National Fire Protection Agency.

Q: What happens if I break the law?

"It is illegal to sell, transport, or use fireworks that do not carry the 'safe and sane' seal, as well as possess or use any fireworks in a community where they are not permitted. If convicted, a violator could be fined up to $50,000 as well as sent to jail for up to one year."

Q: How can I prevent injuries and fires at my Fourth of July party?

A: CAL FIRE  and the State Fire Marshal offer the following precautionary tips (some more obvious than others):

A: ABC7 has compiled a comprehensive list of fireworks shows starting Wednesday in SoCal.


View Southern California Fireworks for the 4th of July, 2013 in a larger map

What are your plans Thursday? Let us know in the comments and Tweet us a pic of the festivities!