French and U.S. media are reporting a series of attacks hit Paris Friday at several locations around the city, including a nightclub and soccer stadium. Five perpetrators and more than 120 victims are thought to have died in six attacks in Paris, according to the city's prosecutor. It's not yet clear who the attackers were or whether the incidents are related.

This story is no longer being updated. See coverage of the aftermath of Friday's attacks in Paris here.

Five attackers may have been killed and more than 120 victims may have died in six deadly incidents in Paris, according to the city's prosecutor, Francois Molins.

The Associated Press reports the gunmen who took over the Bataclan Theater died by blowing themselves up:

The Paris police prefect said the attackers at the Bataclan rock venue blew themselves up with suicide belts as police closed in, killing four people. He said the gunmen first sprayed cafes outside the venue with machine gunfire, then went inside the concert hall and killed more before the assault by security forces.

The prefect, Michel Cadot, said the one set of attackers was at the stadium and at nearly the same time the second group attacked within the city.

Cadot said all the attackers are believed dead, although authorities are hunting for any possible accomplices.

The head of the anti-terrorism unit for the L.A. County Sheriff’s Department said the most concerning aspect of Friday's terror attacks in Paris was the focus on so-called "soft targets" like  bars, clubs and concerts.

Security tends to not be at the highest level at those venues, John Stedman, who heads the Criminal Intelligence Bureau of the L.A. County Sheriff’s Department. Security is often lax, which can open the door for possible attacks.

“Something like this could happen anywhere, that’s what we train for constantly," Stedman told KPCC. "We’re ready to respond to anything that might occur."

He added the bureau is has heightened awareness and vigilance following the deadly attacks, even though there aren’t any major threats in the Los Angeles area.

“We’ve been consistently enforcing that message. We’ve also been in contact with the local FBI field office here, along with our local partners and all our mutual aid agencies in the county,” Stedman said. "We feel like we have a pretty good notification process, and everybody’s pretty much on the same page right now.”

Stedman points out that while his department isn’t a “spy place,” it does deal in plenty of information shared with other agencies.

“When there’s a pattern or a trend or a threat that evolves, we make sure everybody knows about it and that we’re all on the same page.”

The siege in Bataclan Theater in Paris has ended, France 24 reports. At least 100 people were killed in the attack there, the station said.

Three gunmen who had taken hostages in the theater have been killed, according to France 24. One police official described "carnage" inside the building to the Associated Press.

Many more are likely to have died in a bombing at a soccer stadium, Stade de France, as well as other attacks at a bar and restaurant, where at least 10 people were killed, according to the BBC.

The BBC has put together a map of the sites of Friday's attack: 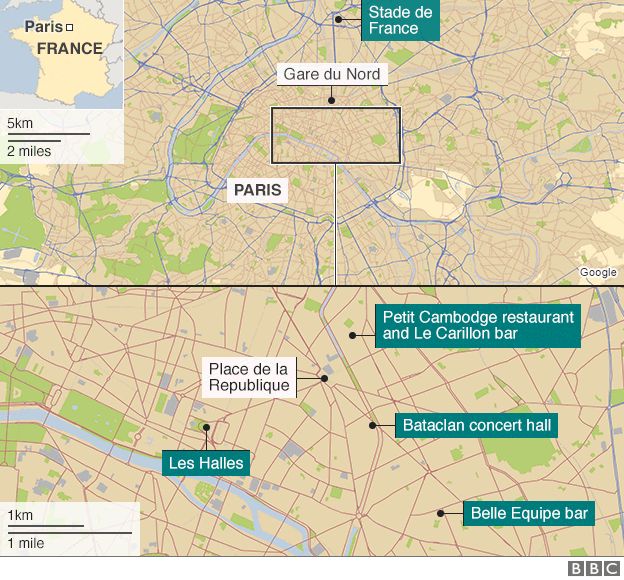 Local law enforcement agencies said they're monitoring the deadly situation in Paris, but that it hasn’t led to any changes in deployment.

The Los Angeles Police Department noted on social media that there are no known threats in Los Angeles. The Sheriff’s Department told KPCC that nothing has changed on their end, aside from monitoring and keeping up with the events on television.

"My thoughts and prayers are with all those in Paris. I am heartbroken and outraged by these senseless acts of violence. Los Angeles stands united with those around the world against these terrorist activities.”

L.A. Airport Police Officer Rob Pedregon said those efforts were mostly to add to travelers’ sense of security, not because of any explicit threat, he said. The airport police have not changed their patrols or added more personnel, he said.

The Associated Press is reporting that hostages were being held in Paris' Bataclan Theater. It was unclear how many people were in the hall. One official said there were around 100 while another said there were far fewer, the AP reported.

Eagles of Death Metal, a rock band from Palm Desert, was scheduled to play at the Bataclan Concert hall Thursday night, according to the band’s website. The drummer Julian Dorio and other band members are safe, his wife told the Washington Post Friday evening. Yet shortly after, the band tweeted that it was still trying to confirm the safety of its crew.

The L.A. Times profiled the band last month. KQED also has this rundown of the band and others from California slated to play the club this week.

Paris-based Al Jazeera English producer Tristan Redman interviewed people who escaped the music venue, including these two men who can be seen in this video on Twitter. His latest tweet says Parisians are opening their doors to people on the street.

French President Francois Hollande says he is closing the country's borders and declaring a state of emergency after several dozen people were killed in a series of unprecedented terrorist attacks.

Hollande, in a televised address to his nation, said the nation would stand firm and united against the attackers.

He said security forces are assaulting one of the sites hit by Friday's attacks, without elaborating.

You can watch the full speech below.

Former U.S. Secretary of Homeland Security Michael Chertoff says it is too early to know exactly what was happening in Paris.

Social media posts from purported ISIS supporters could indicate that "there was a group waiting for this, but it could be a group watching," Chertoff said in an interview with MSNBC Friday night.

"I don't think we can say this proves anything, but again it supports the idea that it's terrorism," Chertoff said.

John Cohen, a former Homeland Security Department counterterrorism coordinator, says the presence of multiple attack scenes at the same time suggested a coordinated effort to "send a message" and raises immediate terror concerns, including for other cities in Europe and potentially the United States as well. He said both Al Qaida and ISIS have relied on the strategy of coordinated attacks in the past.

Still, Homeland Security Department officials say there is no known, credible threat against the United States.

DHS officials are in contact with their foreign counterparts amid reports of multiple shootings and explosions in Paris.

French and U.S. media are reporting multiple attacks in Paris Friday with an unknown number of casualties.

Patrick Klugman, deputy mayor of Paris, told CNN that it looked like the attacks could be the worst ever for the city and included an explosion at or near a football stadium.

It was still unclear whether the attacks were related. KPCC has not independently confirmed the information but will bring updates as we learn more.

One eyewitness spoke to the Associated Press about a shooting at a restaurant.

Emilioi Macchio, from Ravenna, Italy, was at the Carillon bar near the restaurant that was targeted, having a beer on the sidewalk when the shooting started, AP reports.

He told AP he didn't see any gunmen or victims but heard what sounded like fireworks. He said he hid behind a corner then ran away.

France has been on edge since deadly attacks by Islamic extremists in January on satirical newspaper Charlie Hebdo and a kosher grocery that left 20 dead, including the three attackers.

The restaurant targeted Friday, Le Carillon, is in the same general neighborhood as the Charlie Hebdo offices.

The country has seen several smaller-scale attacks or attempts since, including an incident on a high-speed train in August in which American travelers thwarted a heavily armed Islamic radical trying to attack passengers.

Los Angeles Police Commander Andrew Smith told KPCC the department is not on tactical alert, but they are monitoring the situation.

Correction: An earlier version of this story misspelled the last name of L.A. Airport Police Officer Rob Pedregon. We regret the error.