Schiff calls on Nunes to recuse himself from Trump-Russia probe

Rep. Adam Schiff of Burbank, the top Democrat on the House intelligence committee, said Monday that the committee chairman, Rep. Devin Nunes, should recuse himself from heading the lawmakers' investigation into Russia's interference in the 2016 election and ties between the Trump campaign and the Kremlin.

Schiff said Nunes should step away from the investigation because of a secret meeting he had with a source last week on the White House grounds.

Nunes said his source — whom he has yet to name — showed him intelligence reports in which the names of Trump associates had been shared among agencies after their communications were scooped up in U.S. surveillance of foreign officials.

Schiff said Nunes remains the only member of the House intelligence committee that has seen this information. 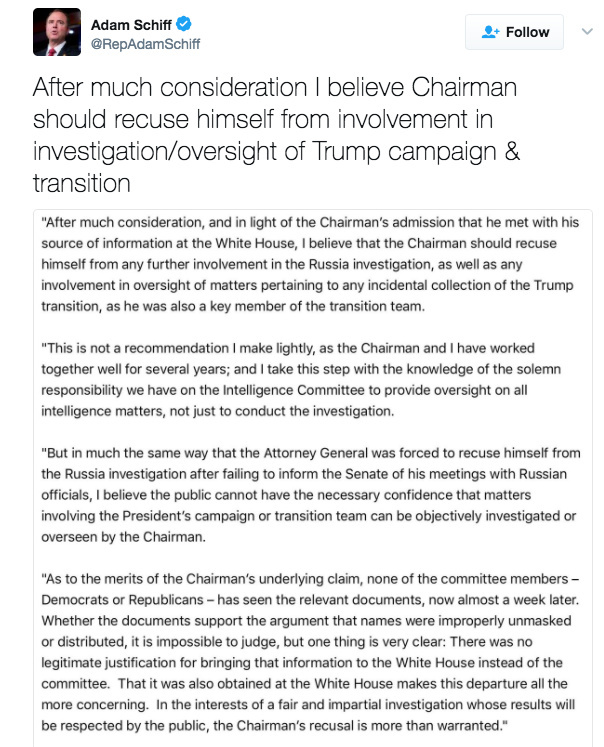 Nunes said he went to the White House grounds to review intelligence reports and meet the secret source behind his claim that communications involving Trump associates were caught up in "incidental" surveillance in the waning days of the Obama administration.

The location of the meeting, confirmed Monday by Nunes' spokesman, revived questions about the independence of the committee's investigation into Russia's interference in the 2016 election and Trump associates' ties with the Kremlin. Democrats have accused Nunes of coordinating with the White House, an allegation he has strongly denied.

After reviewing the information last week, Nunes called a news conference to announce that U.S. spy agencies may have inadvertently captured Trump and his associates in routine targeting of foreigners' communications. Trump quickly seized on the statements as at least partial vindication for his assertion that President Barack Obama tapped his phones at Trump Tower — though Nunes and FBI Director James Comey as well as the committee's top Democrat have said there is no such evidence.

The Senate intelligence committee is also conducting an investigation into Russia's interference in the election and possible ties with the Trump campaign. And on Monday, it announced that Trump's son-in-law, Jared Kushner has agreed to be interviewed. The White House confirmed that Kushner, a senior Trump adviser, had volunteered to be interviewed about arranging meetings with the Russian ambassador and other officials.

"Mr. Kushner will certainly not be the last person the committee calls to give testimony, but we expect him to be able to provide answers to key questions that have arisen in our inquiry," the chairman, Sen. Richard Burr of North Carolina, and the top Democrat, Mark Warner of Virginia said in a joint statement Monday in a sign of bipartisanship.

The House investigation, meanwhile, has been plagued with partisan divisions under Nunes' leadership.

The chairman did not tell the top Democrat on the committee, Rep. Adam Schiff, about the meeting at the White House complex. It is highly unusual for a committee chairman and ranking member not to coordinate meetings related to an investigation.

"'I think the chairman has to make a decision whether to act as a surrogate of the White House — as he did during the campaign and the transition — or to lead an independent and credible investigation," Schiff said Sunday on CBS' "Face the Nation."

Spokesman Jack Langer said Monday that circumstances required that Nunes go to a secure room at the White House complex to review classified "executive branch documents that have not been provided to Congress."

In addition to the White House itself, the grounds include an adjacent building with offices for National Security Council and other executive branch employees.

"Because of classification rules, the source could not simply put the documents in a backpack and walk them over to the House Intelligence committee space," Langer said. "The White House grounds was the best location to safeguard the proper chain of custody and classification of these documents, so the chairman could view them in a legal way."

Nunes would not name the source of the information. In an interview with Bloomberg View on Monday, Nunes said the source was not a White House staffer and was an intelligence official.

White House spokesman Sean Spicer would not comment on whether White House officials were involved with Nunes.

The clandestine meeting was remarkable for a committee that seeks to demonstrate bipartisanship, said Jonathan Turley, a law professor at George Washington University who has written extensively about separation of powers.

"Ideally, any meeting at the White House on a subject under investigation would have been done with the knowledge of the ranking member or his staff," Turley said. "Because these committees are the least transparent in Congress, both parties have historically tried to be open with each other on contacts or meetings with agencies on key questions."

The disclosure renewed calls for an independent committee to investigate the Russia ties.

When Nunes disclosed the intelligence reports last week, he said what he reviewed had nothing to do with Russia, which could suggest that Trump associates were in touch with other foreign targets of U.S. intelligence surveillance in November, December or January.

"The chairman is extremely concerned by the possible improper unmasking of names of U.S. citizens, and he began looking into this issue even before President Trump tweeted his assertion that Trump Tower had been wiretapped," Langer said.

It is unclear exactly what documents Nunes reviewed.

Nunes and Schiff have asked the FBI, CIA and National Security Agency for the names of officials who were cited in intelligence reports. The committee has said it is getting some of what it requested, but has not received everything.