Coming to Pasadena this weekend? Prepare for a traffic nightmare

Update, Sunday 10:13 a.m.: Ten people were taken to the hospital Saturday, mostly due to the effects of the heat. Parking has also been an issue. People aren't paying attention to where they can and cannot park — and they're getting towed. The parking problems are making area residents unhappy).

What do professional cyclists, space enthusiasts and U2 fans have in common? They’re all about to descend on Pasadena — at the same time.

This weekend, the city expects several coinciding events to attract 200,000 people to the area. On the calendar: two sold-out U2 concerts at the Rose Bowl, the NASA Jet Propulsion Laboratory's annual two-day open house and the final leg of cycling's Amgen Tour of California.

On top of those three mega-happenings, the city will play host to a boxing exhibition, a motorcycle club reunion, the sixth annual Pasadena LitFest and the Eaton Canyon Spring Awakening Festival.

"Here’s the most important thing you need to know: arrive to your event early," Pasadena public information officer William Boyer told KPCC. "We’ll be seeing an increase from the usual traffic, no doubt."

Lisa Derderian, the city's Emergency Management Coordinator, also shared a few tips: "There's a lot that goes on behind the scenes to keep the public safe. We'll have both uniform and non-uniform personnel. And again we really want people to enjoy the experience of coming to the many events that we have.  Want people to stay hydrated, dress in layers, try to avoid alcohol."

Due to the Amgen race route, the east and westbound I-210 off-ramps for Arroyo Boulevard will temporarily close for about 30 minutes from approximately 1:20 p.m. to 1:50 p.m. as cyclists pass through the area on Saturday. The closure may impact arrival times at JPL, according to Boyer.

See a map of the race route below, which shows additional Pasadena road closures: 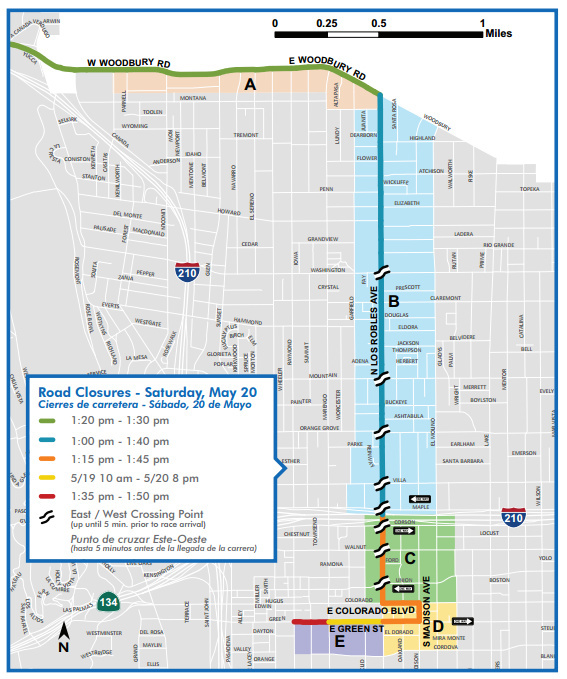 Tickets to JPL’s “A Ticket to Explore JPL” sold out back in March and will attract around 30,000 visitors to its campus, Boyer said. That means that even if you don't have a ticket, this is one to watch out for.

Parking lots for the sold-out U2 concerts on both Saturday and Sunday will open at 2:30 p.m., four hours before the shows start. Construction signs installed earlier this week in the Rose Bowl area flashed with warnings of the impending weekend traffic.

The Rose Bowl Stadium also has a strict bag policy, so watch out if you're planning on bringing a bag to one of those shows:

City officials reminded the public in a press release this week to arrive early, drive carefully, bring money for food, parking and souvenirs — and to have fun, but celebrate responsibly.

Caltrans also has an online map which allows drivers to see local road closures that may not be available on all GPS devices or apps, according to a statement from the city of Pasadena.

With these traffic complications of epic proportions, are you going to be staying away from Pasadena this weekend? Let us know on Facebook what you're doing instead.