Californians purchased 17,226 firearms in the week after the Las Vegas shooting, according to data obtained by KPCC from the California Bureau of Firearms. That was a 12 percent jump from the previous week, but represented only the fifth highest week of gun sales this year.

After the shooting at the Pulse nightclub in Orlando last year, firearms sales jumped 45 percent the following week in California, setting the highest weekly total of the year to that point. Similar spikes followed other mass shootings, including the 2015 incident in San Bernardino. 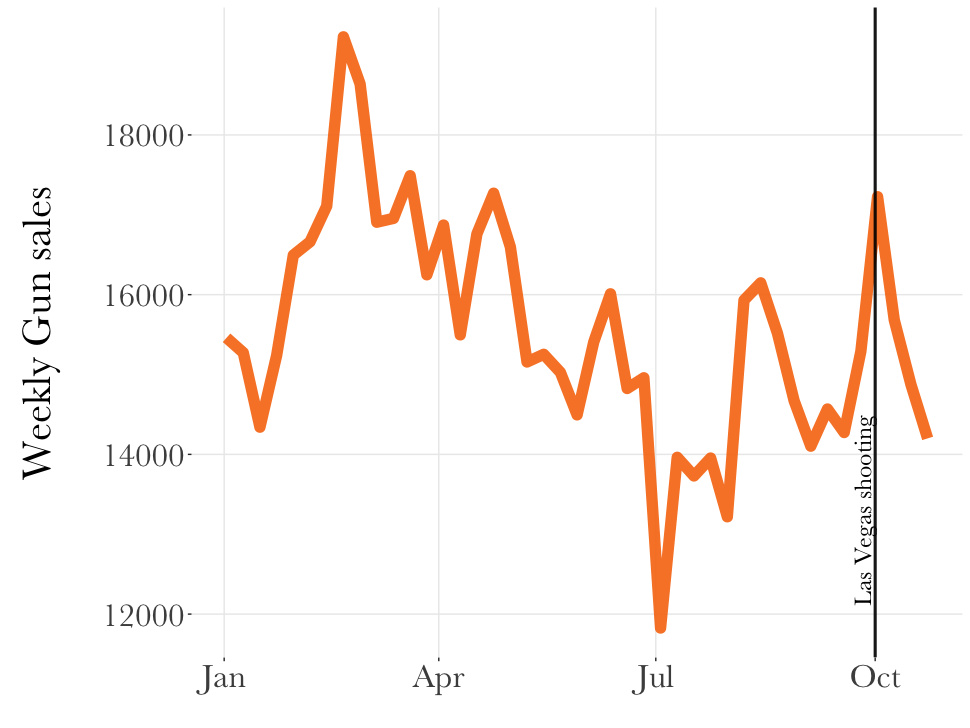 Gun trend experts say the modest sales in response to a mass shooting are a sign that gun enthusiasts are less worried about gun control measures with Trump and Republicans dominating the federal government. The spikes following the Orlando and San Bernardino shootings occurred while Democrat Barack Obama was in the White House.

As president, Obama routinely made calls for gun control following mass shootings. That sent many Americans scrambling to buy firearms they feared might become illegal.

Things are different with Trump in office. "There's not the urgency or urgent need because the window of opportunity is not closing," said Craig DeLuz, a lobbyist with the Sacramento-based Firearms Policy Coalition, which advocates for gun rights.

Trump issued no call for gun control after the Las Vegas massacre, instead pointing to mental health issues. And the national debate over so-called "bump stocks" is moot in California, as the devices are already illegal in the state.

Nationwide, gun retailers reported fewer background checks after the Las Vegas shooting, as compared to the periods following incidents in San Bernardino, Sandy Hook and Orlando. Background checks are considered the best proxy for gun sales at the federal level, where gun sales data are not available.

Last year, Californians shattered records for gun sales, snapping up more than a million firearms for the first time ever.

"We saw just an overwhelming number of firearms sales," DeLuz said. He cited California's assault weapons ban as a driver of sales, as enthusiasts bought soon-to-be-banned models while they were still on the market.

But this year, sales are more sluggish. 2017 firearms sales are on pace to dip to around 800,000, which would be the lowest total since 2011. That's according to the state data, which captures sales through November 2.

The pace of sales in California could pick up after Black Friday sales are factored in. Early reports indicate that background checks were up this year across the country.