As reports of sexual harassment have increased dramatically at the City of Los Angeles, legal claims over harassment and assault have been costly to the city for years.

The city has paid out $8 million in sexual harassment claims and judgments since July 1, 2011 — even before the issue grew into a national moment of reckoning, data provided to KPCC from the City Attorney show.

Now, a new reporting system for city workers alleging harassment has taken in nearly as many reports in the past couple of months as were submitted in a previous five-year period. What this means for the city in terms of cost and other consequences remains to be seen. 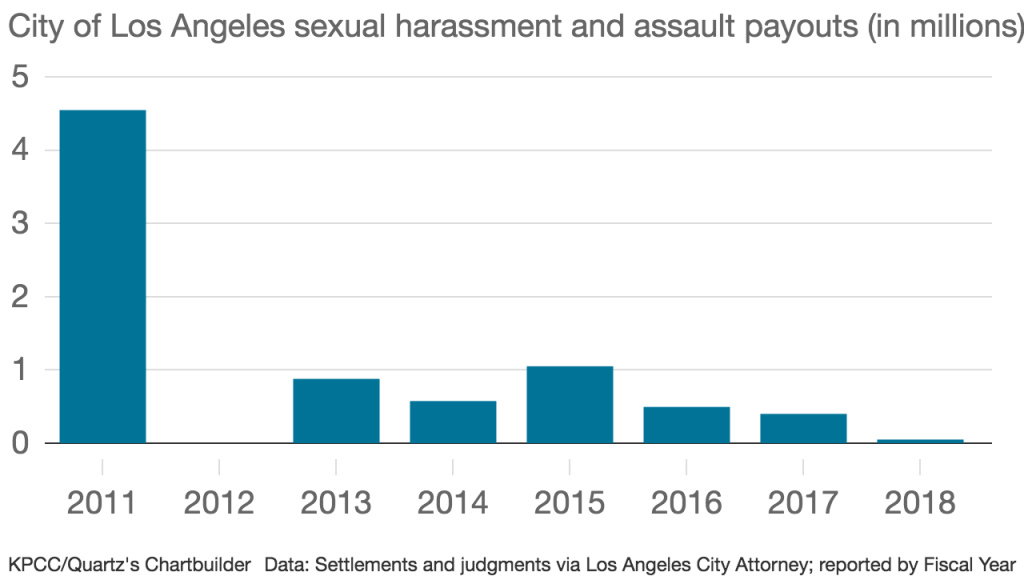 Sexual assault and harassment cases make up a small number of the city's payouts — just 18 out of more than 10,000 paid out by the city, according to the data. But their costs soar far beyond most other cases, and the stories told in court documents reviewed by KPCC are disturbing.

One $1.45 million payout stemmed from sexual assault claims by a minor involving the Department of Recreation and Parks.

Another case brought by Los Angeles Police Department officer Melissa Borck alleged years of physical and verbal harassment at the department. In court records, she alleged a male officer forced Borck's head into his crotch and simulated oral copulation. LAPD officers would call female patrol cars "tuna boats" and remark that women should not work for the department, according to the filings.

Borck settled for $1.5 million. Borck had previously sued the city over harassment, winning a jury trial in 2009. Both Borck's settlement and the Recreation and Parks cases arrived in the 2011 fiscal year, pushing that year's payouts past $4 million.

Sexual harassment and assault payouts span several city departments. But more than three-quarters of them, representing more than $6 million in city money, have been connected to the Los Angeles Police Department.

Among the cases: an LAPD officer who allegedly gave alcohol to minors enrolled in the Explorer program and raped them, according to court records, and a supervisor who allegedly made homophobic and racist remarks and broke into one officer's desk to steal notes about his own misconduct.

Aside from the police department, Recreation and Parks was the only other department that paid out more than $1 million.

Payouts for the Port, Department of Public Works and Los Angeles World Airports are tracked separately and are not reflected in these totals. The three departments are among those required to take part in the city's new reporting requirements.

A working group that includes the mayor's office, City Attorney and several other departments has been reviewing city policies on sexual harassment in an effort to further improve officials' response to harassment and assault reports.