What’s the hottest gift item in the Jewish world today?  It’s a Hanukkah menorah in the shape of a turkey! And they’re selling like latkes. 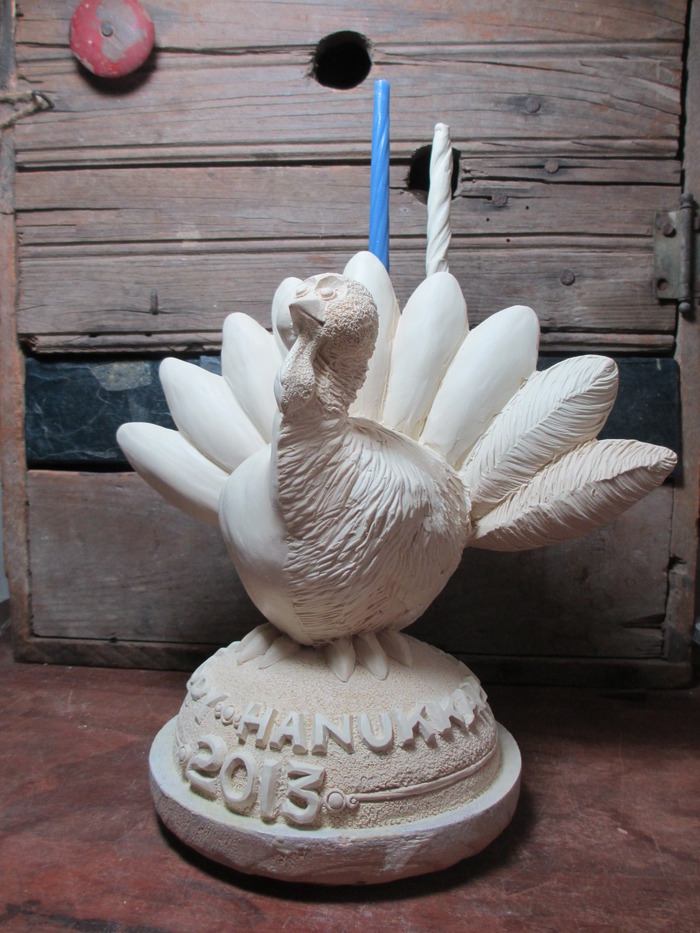 The "Menurkey," from its Kickstarter page, where it doubled its fundraising goal.

We all know that ever since President Abraham Lincoln set the date, Thanksgiving falls on the fourth Thursday of November; Nov. 28 this year, late for Thanksgiving. Hanukkah usually comes in December, but this year it’s early. For once in many lifetimes, Nov. 28 marks Thanksgiving and the start of Hanukkah.

Actually, Hanukkah only comes early in the Gregorian calendar. It always comes on the 25th of the Hebrew month of Kislev. It’s just that the Hebrew calendar is based on the movement of the moon and the sun, while the Gregorian calendar is based on the sun, and the two calendars don’t exactly parallel each other. That’s why Jewish holidays seem to fall at somewhat different times each year. It’s that old devil moon.

So what are we to make of what some are calling "Thanksgivukkah?" Thanksgiving and Hanukkah do have some aspects in common, not just this year’s shared date.

One is the idea of giving thanks for a miracle.

In the case of the Pilgrims, it was a miracle they survived that initial winter in Massachusetts when half their party perished. The first Thanksgiving was a thankful celebration they had made it through a second winter with the help of the local natives who taught them new ways to grow food. "The First Thanksgiving at Plymouth" (1914) By Jennie A. Brownscombe, Stedelijk Museum De Lakenhal

Hanukkah, which means dedication, celebrates the miracle when a one-day supply of oil lasted an entire eight days in the Eternal Light in the Temple in Jerusalem. This was about 2,200 years ago.

Years earlier, Jerusalem had been conquered by the Seleucids who brutally defiled and desecrated the Temple. When Judah Maccabee and his Jewish warriors eventually revolted against the Seleucids, they re-took, cleansed, and re-dedicated the Temple by re-lighting the Eternal Light.

Food is another common aspect of Thanksgiving and Hanukkah. It’s not Thanksgiving without turkey, cranberry sauce, sweet potatoes and pumpkin pie. It’s not Hanukkah without latkes – potato pancakes – and sufganiyot – jelly donuts. In celebration of Thanksgivukkah, some bakeries are even cooking up turkey-stuffed donuts. I think I’ll pass.

Each year at Thanksgiving, through my work at Union Station Homeless Services in Pasadena, I’ve been able to participate in a unique Thanksgiving dinner. On Thanksgiving Day, thousands of our volunteers gather in Pasadena’s Central Park to serve meals to the homeless and hungry, individuals and families, people of all ages and backgrounds. Volunteers as diverse as our guests serve delicious meals accompanied by smiles and warmth.

Last Thanksgiving, we served some 5,000 meals. Imagine coordinating the preparation and serving of 300 turkeys, 500 pies and 850 pounds of mashed potatoes. The logistics are daunting, but people open their hearts to their neighbors and extend a hand in friendship and hospitality. And for at least one day, we are all brothers and sisters, some giving, some receiving, in tremendously colorful variation, unified in the experience, together as family. And, to me, that’s a miracle.

The Pilgrims would have understood such a miracle. So, too, would have Judah Maccabee. So, Happy Thanksgiving and Happy Hanukkah!