John Rabe interviews the actor who plays him in 'The End of the Tour,' David Foster Wallace biopic

At "The End of the Tour," of course someone else winds up becoming yourself.

Near the beginning of "The End of the Tour," the David Foster Wallace biopic based on David Lipsky's memoir "Although of Course You End Up Becoming Yourself," you can hear the actual voice of NPR's Robert Siegel introducing an appreciation of the author on "All Things Considered."

Then, toward the middle of the film (reviewed here by MPR's Stephanie Curtis), Wallace is interviewed in a Minnesota Public Radio studio by a tall, dark man with a lovely voice. That's me. (Click the bonus audio to hear that 1996 interview from the MPR archives.) Well, it was me, in 1996, in real life.

But in the movie, it's Dan John Miller.

I have no gripe with Miller. In "Walk The Line," which won an Oscar, he played Johnny Cash's guitarist and best friend, Luther Perkins; he's won a bunch of awards for narrating audio books; and he's the leader of the band Blanche.

But I do wish they had picked me to play me. I really liked me for that part.

It was one thing when there was a movie with my name in 2010: 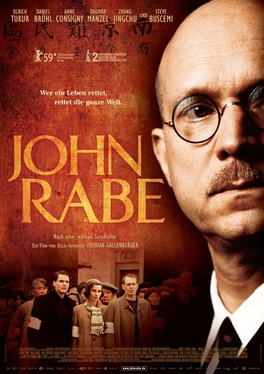 I can't really get mad that German filmmaker Florian Gallenberger didn't pick a C-list public radio celebrity to play the Oskar Schindler of China. I couldn't have pulled off the role of a man who saved something like a hundred-thousand lives during the infamous Japanese Rape of Nanking.

But for the 15 seconds "NPR Host" (me) is in "The End of the Tour," I would have been so perfect in that role you would have thought it was me. You could say I was born to play that part.

In any case, listen to my interview with Dan John Miller — click that little arrow above — and when they're making a movie about Miller, send a letter to the director telling them you know someone who'd be perfect to play him.