Find a specific episode from The Takeaway's archive

Vote, But Your Civic Engagement Doesn't End There

Millions of Americans voted last Election Day. But millions of others participate in our democracy every day in small ways. While 7 in 10 Americans report feeling generally negative about what is going on in the country today, Americans are also more hopeful about solving problems locally. According to the 2018 Civic Engagement Survey by the Public Religion Research Institute and The Atlantic, a majority of Americans say they are optimistic that people in their communities who hold different political views can come together to solve problems.

We explore that problem solving on this hour all about civic engagement. We begin by explaining exactly what civic engagement is, how it works, and where it happens. Priya Parker is a conflict resolution facilitator, author of "The Art of Gathering: How We Meet and Why it Matters" and Hollie Russon Gilman is a lecturer at Columbia University and co-author of "Civic Power: Rebuilding American Democracy in an Era of Crisis."

The Takeaway is then joined by Mamaroneck High School government teacher Joseph Liberti, who started a new program to get his students civically engaged in their local community. One of his students, 15-year-old sophomore Simon Worth, also speaks about his experience with the hands-on program.

Then we turn and look at the Congressional Management Foundation. For decades, the CMF has researched citizen engagement with Congress. We talk to Bradford Fitch, the President, and CEO of CMF, about the huge increase in communications volume being reported by Congressional offices and in town hall meetings in the year after the election, and whether that enthusiasm and engagement persist today.

Librarians across the country strive to serve the needs of their communities, but from city to city, those needs don’t always look the same.

In Nashville, Tennessee, as the Black Lives Matter movement was growing across the country, librarians noticed a growing demand within their community to have honest conversations around issues of race. Since then, the library has facilitated discussions for a variety of different groups including local law enforcement, college students, and corporations. 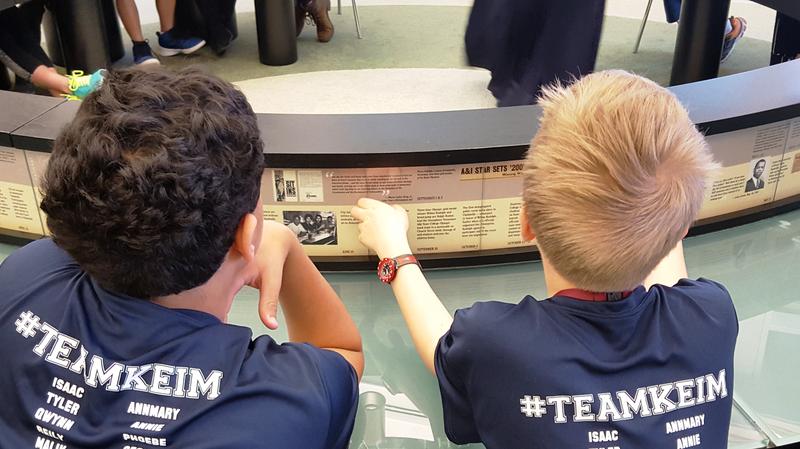 Two students from a local middle school sit at a replica lunch counter, similar to the ones where college students like Diane Nash and John Lewis would “sit in” to peacefully protest against segregation at downtown restaurants.
(Nashville Public Library )

Andrea Blackman is the director of the Civil Rights Room at the Nashville Public Library. She joins The Takeaway to explain how her library has started conversations on racial justice within the Nashville community.

Does this moment of vigorous civic engagement extend to giving and philanthropy, too? In 2017, Americans gave more than four hundred billion dollars to charity. But exactly who is giving that money, where they are donating, and why they choose to give -- that’s all been changing, in recent years. Stacy Palmer, the editor of the Chronicle of Philanthropy, brings us through what we know about American charitable giving today.

In practice, all this civic engagement can become pretty difficult if people can’t find common ground. And who steps in when the government can’t bridge the gap? Sometimes -- it’s religion.

Alan Yarborough, the Communications Coordinator for the Episcopal Church’s Office of Government Relations, also created a 5-week curriculum on civil discourse for churches to use.

Bill Steverson, is a member of St. Timothy’s Episcopal Church in Signal Mountain, Tennessee near Chattanooga.

Click on the 'Listen' button above to hear this segment. Don't have time to listen right now? Subscribe to our podcast via iTunes, TuneIn, Stitcher, or wherever you get your podcasts to take this segment with you on the go.

The Takeaway hears from reporters in Arizona, Texas, and Alaska about the impact of the shutdown on their communities and how local charities and businesses are stepping up to help.

The attack comes about a month after President Trump first announced that American troops would be pulling out of Syria having "won against ISIS."

Women's March: Is its Message Still Urgent in 2019?

The Women's March launched a movement. Is it still alive today?

Calculating the Costs of the Longest Government Shutdown in History

Calculating the Costs of the Longest Government Shutdown in History

By some estimates, the shutdown will soon cost as much as the President has requested for his wall.

The outcry for the price hike comes six months after the after the election of Emmerson Mnangagwa, who promised “radical economic reforms to attract investment” at his inauguration.

Fuel thieves have been tapping into pipelines throughout Mexico. The newly-elected President has a plan to stop them. Will it work?

What the Gillette Ad Says About the Changing Social Landscape

Gillette said they “expected debate.” And they sure got it.

What Recourse do Federal Workers have During a Shutdown? Learning from the 1981 Air Traffic Controllers' Strike

What Recourse do Federal Workers have During a Shutdown? Learning from the 1981 Air Traffic Controllers' Strike

The air traffic controllers' union is one of several organizations representing federal workers who have sued the Trump administration over unpaid wages.

When Newsrooms Aren't Representative of the Country they Report On, What is at Stake?

The Takeaway has a conversation regarding people of color in newsrooms and the stories missed when newsrooms don't reflect the country.

The President was also reportedly highly secretive about his meetings with Russian President, Vladimir Putin.

Does Rep. Steve King's Racism and Xenophobia Have a Place in the Republican Party?

Last week, Representative Steve King of Iowa, who has a long history of xenophobia and racism, gave an interview questioning why the term "white nationalist" became offensive.

Incarcerated Parents: Why Many Nonviolent Offenders Lose Their Parental Rights

Many parents in prison are completely stripped of their parental rights, even if they are incarcerated for non-violent, low-level crimes.

Is President Trump Taking Liberties with the Laws Governing Shutdowns?

According to the federal statute in question, during a shutdown government offices should only address “emergencies involving the safety of human life or the protection of property."

As "Hamilton" Arrives in Puerto Rico, Questions Over Access Abound

On Friday, "Hamilton" kicks off a two-week run in Puerto Rico. The production aims to bring tourism and media attention back to the island, but some Puerto Ricans have reservations.

In their own Words: Furloughed Workers on their First Missed Paycheck of the Shutdown

They're worried about paying their mortgages, racking up debt, and the work they left behind.

Do Border Residents Agree with Trump's Insistence on the Wall?

There are doubts that the wall would actually make much of a difference to the already-enforced border.

Patrick, who asked that we not use his last name, is a cyber security contractor with NASA.